The litte mermaid is searching for a friend 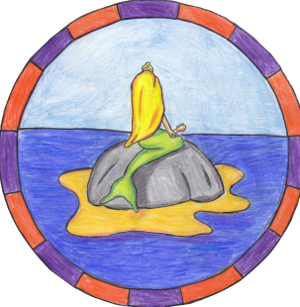 The little mermaid is searching for a friend who is exactly like her.

Unfortunately she cannot find an other mermaid in the ocean. So she has to stay all alone. Or is there any solution for this problem?

The little mermaid is all alone. She is sadly sitting on a
rock, considering her lonely reflection in the water.

"Oh my goodness," she sighs; "I am longing for a
friend who is exactly like me. With a fish fin, with long
fair hair and with a wonderful voice. I have been
looking for her everywhere. I have been searching
behind every water plant, every coral and behind
every reef. But I couldn’t find her anywhere. I am the
most lonely creature in the ocean."

The little mermaid is so desperate that she buries her
face in her hands and weeps bitterly. She forgets
everything else around her. But that is a mistake -
there is something wrong with the sea. It becomes
restless and wild, like a marine earthquake, though
there is no wind at all. What is going on? Now an
enormous head appears. It is nothing less than the
head of a dragon, living in the sea. Unnoticed by the
mermaid, the monster swims closer and closer. His
green and scaly skin is shining. His eyes are glowing
fiery-yellow. Two fearsome horns are growing out of
his head.

In his own way the dragon looks as strange as the
mermaid does, however being very different.
Attentively he contemplates the strange ceature with
the fish fin.

"Shall we be friends?" he hisses in a friendly way.

As a result of his words, the little mermaid finally
raises her head. When she notices the dragon she is
really frightened.

The monster is a bit slow on the uptake. "Why not?"
he wants to know.

The little mermaid swallows her fear. "Well, because
… we are very different," she bravely makes clear.
"Just look at both of us."

But the dragon takes no refusal. "Are we too different
to go for a swim together?" he obstinately asks. His
eyes are sparkling in an adventurous and inviting way.

The little mermaid is about to say: "Indeed. That is
what we are." But then she closes her mouth and
thinks about the proposition. In fact she is more keen
on going for a swim than sitting around on a rock and
wallowing in self-pity. Why shouldn’t she stop being
sad for a while? And so she smiles and says:
"Swimming together would be nice." In fact it is
absolutely not in order for a mermaid to swim together
with a dragon.

The sea monster is delighted with the promise.
Instead of shimmering green he flushes with joy. The
mermaid jumps into the water and swims with the
dragon as if it were a competition. This is really fun. In
the open sea, the dragon is faster than the mermaid –
because he is taller and stronger. But in the coral reef,
the mermaid has the edge over the monster –
because she is smaller and more mobile. The day
passes in the twinkling of an eye.

"That was great", says the dragon beeming with
happiness at the end of the day; "I haven’t been that
happy for such a long time."

"I feel the same," the mermaid admits. "Sharing the
time with you was great fun."

The dragon is pleased with the praise.
"So we are friends now?" he wants to know.

But the mermaid shakes her head and denies. All of a
sudden she looks very sad again. "We can swim
together but we cannot be friends," she insists,
“because we are too different."

The dragon does not understand because he is still a
little bit slow on the uptake. "We are too different in
order to do what?" he asks in a silly way; "Isn`t it
sufficient to swim together?"

The mermaid sighs. "We are too different to sing
together," she explains patiently; "this is very
important for a mermaid." She sits down on a rock and
starts to sing with her wonderful voice. The song is
about longing and unfulfilled dreams.

The dragon listens deeply moved. He likes the song
very much. The sea monster has never before heard
anything so beautiful. He would like to sing as
beautifully as the little mermaid. The sea monster tries
hard but only a smoky growl comes out of his throat. It
sounds very different from the mermaid`s voice. But
the dragon cannot be that easily discouraged and
carries on singing obliviously. "Frizz, frizz," he makes
again and again. Smoky clouds are rising as a result
of the dragon`s attempts to sing like a mermaid. The
efforts inflame his throat. The monster no longer
time in his life he gets a nasty sore throat. Now he is
not even able to growl any more. He only croaks like
an ordinary raven. The sea monster is very ashamed.

The little mermaid tries to console him taking him into
her arms because he has tried so hard to sing like a
mermaid.

"Maybe," she emotionally whispers, "we can be
friends after all."

But the dragon is no longer sure of that. He feels very
miserable. His breath is feverishly hot. When the sea
monster coughs, he spits fire by mistake. The fire
heats up the water and lights the sky. It looks
beautiful. The mermaid is fascinated. Never before
she has seen and experienced something so
wonderful. She would like to be able to spit fire
herself. The mermaid tries. But nothing except spit is
coming out of her throat. But nevertheless the
mermaid goes on trying because she cannot be easily
discouraged either. "Spit, spit," she makes again and
again. She continues until her throat hurts. And her
wonderful voice is hoarse. Now the little mermaid
croaks like an ordinary raven as well. Never before
something so embarrassing has happened to her. The
mermaid is very ashamed.

The dragon tries to console her caressing her cheek -
she has tried so hard to spit fire like a dragon.
"This is true friendship," he emotionally whispers.

This time the little mermaid does not contradict the
dragon. Because she feels exactly the same as the
sea monster that is 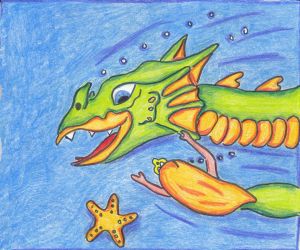 different from her in such a
fascinating way. Since that
moment the little mermaid
and the dragon have
become friends.